The Domus of the Mithraeum of Lugo (Spain)

The discovery in Lugo, by 2000, of the Roman Domus and Mithraeum (Mithras Temple) as a result of the rehabilitation of the building of the Vice - Rectorship of the University of Santiago in Lugo (ancient Pazo de Montenegro), is an advance in knowledge and disclosure of religious culture of the Roman Empire between the 1st and 4th Century A.D., widely practiced among the militia, besides having brought to light the temple of Mithras western more Roman Empire. The consecration of temples to any deity by the military stationed in the stationes militum was very common in the Empire and used to relate to the arrival at the place or the end of their service. In the case of Lugo (Lucus Augusti), Mithraism or Mysteries of Mithras was implemented by the centurion and local tax collector Gaius Victorius Victorinus, as appears from the inscription on the Ara found in the Plaza Pio XII, whose text is:

"To the never conquered god Mithras, Gaius Victorius Victorinus, centurion of the Legion VII Gemina Antoninianae, Pious, Happy, Devotee and Loyal, gladly erected (this) altar in honour of the place of military control of Lucus (Augusti) and of his two freedmen Victorius Secundos and Victorius Victor".


The god Mithrae or Mithras, deity of light, is shown  wearing a Phrygian cap giving death to a bull. The Mitreum is a small and simple quadrangular building consisting of a hall, a central nave with benches for the celebration of the ritual and an attached room  to save material and clothes. The header would contain a podium where It would be the central scene, the essential icon of the mithraism western with all the own constructive elements of the urban mithraea that imitated the cave where produced  this sacrifice, to similarity of the primitive mithraea (in the photography appreciates  that the access to the Altar is an imitation of the terrain). For this reason it found  in the interior of the Domus, where occupied an entire floor.﻿﻿﻿﻿﻿﻿﻿


The Domus or House of the Lord (Victorius Victorinus) was a two-storey building consists of a pavement courtyard surrounded by a peristyle. In the pictures you can appreciate the good condition of the slabs and pillars bases and shafts of columns surrounding the courtyard.
﻿
From this courtyard was accessible to the various rooms of the domus, among which the oecus (receiving room), decorated with murals on walls and ceilings that are preserved in part, and other courtyards and rooms in the house. The other rooms had to be cubicula (bedrooms), spaces for slaves, freedmen, animals, toilets, kitchen, etc.. It has also made ​​a reconstruction of the start of the staircase to the first floor.
﻿﻿
At the end of the third century AD, during the construction of the Wall of Lugo, the house was used, among other uses, to provide shelter and food to the workers who built. In oecus found a grain mill (muiño) that confirms this hypothesis.

Also found a stack of water. The yard was cut by the subsequent construction of the Wall of Lugo, thus constituting the best means of protecting the domus.
﻿
﻿﻿﻿


This is the translation of the legend in Galician language that appears in the museum section corresponding to this stage: 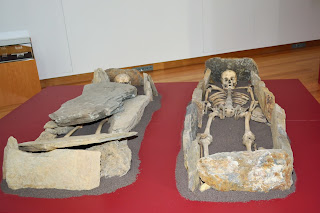 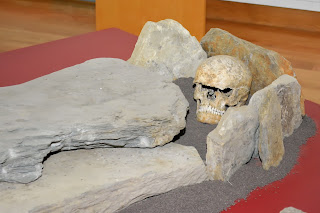 "The following chronological fact of this property consists of the levels corresponding to the Middle Ages. Outstanding structures of this stage are a stone platform flush with the wall, a walkway that after extensive use, was abandoned to give way to a cemetery, whose graves exhumed respond to the type of schist slabs, presenting trapezoidal shapes, rectangular and in some cases spindle's mentioned slabs were obtained from the Wall and many still containing lime mortar. These graves had no background, settling the body directly on the ground. Moreover, it is important to note the existence in some of the graves of small stones, which were used to place the head of the deceased on them. Regarding the skeletons exhumed, we observe that the most common arrangement of the body and the rotation of the latter lying on his back (supine) with some minor variations. More diversity is in the arrangement of the upper extremities, the most common being the position of the left arm crossed stomach height, with the hand crossed over the pelvis. In some cases, the arms are flexed on the chest in prayer. The rotation of the head presents different positions attributed to movement of the body at the time of being placed in the grave.Chronological studies allow us to date the origin of this necropolis in the 12th - 13tht Century AD, with areas that lead to the 15th Century. The study of the skeletons, whose most significant results are summarized in the table below, was conducted by the Department of Morphological Sciences, Faculty of Medicine, University of Santiago de Compostela (Spain).

In the following chronological stages (Early Modern and Contemporary) most characteristic was the formation of current urban plan of this sector. Displays a modern street, the old Rambla de Santiago, Palace (Pazo) of Montenegro, nineteenth street, now called Moucho Street, and finally the construction of the square opposite the cathedral.

Serious infectious pathologies and trauma and tumor.
Poor oral health (tartar, cavities, abscesses, periodontitis, wear).
Dental wear due to fibrous food consumption or use of the mouth as an instrument.
Degenerative wear of the spine:
- Overload on rachis due to transport of heavy weights.
- Hard labor.

"As part of the project, are currently pending of musealization of construction elements such as sockets, door hinges and household utensils, jewelry, etc., from various stages of this archaeological site.


Photographs and free text by the blog owner.